CURRENT DISPATCH TIME 7-10 DAYS.Out of stock items will be re-stocked in 2-3 weeks.

This is the perfect antique-inspired accessory for your desk or to carry with your journal. Made of 100% solid brass and etched for durability with both imperial scales. The combined tool includes, a protractor, french curve, triangles andcircle gauge. It makes the perfect reference point for all applications.

What is a protractor?

What is the French curve?

A French curve is a template composed of many different curves. It is used in manual drafting and in fashion design to draw smooth curves of varying radii.

I decided to get this as it was an all in one journaling tool that sloops easily into pouches or pockets close to your writing things. Looks very stylish and goes perfectly with other Galen items.
Please make one with other journaling shapes. 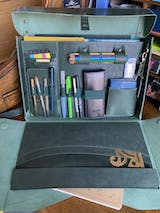 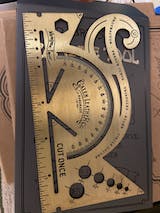 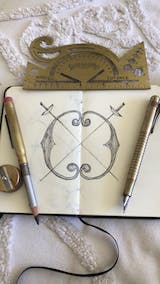 A lovely item that looks fantastic in the folio. Edges feel a little rough, likely due to being laser cut. Will give it a light sand to smooth it out a bit.

This is such an interesting looking tool, and is excellent quality! I love using it for my journaling. It is a great additional to my daily use tools! 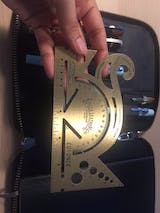 I
I.
Great addition to my collection

I love how amazing this looks in a picture, especially with wood and leather. It's also very easy to use and durable. Love the design so much!

Galen Leather's range of brass equipment is a fitting partner to their fine leather products.
Old world charm with style. 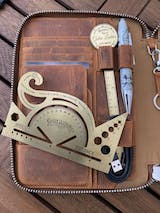 Carried in my Galen Leather A5 Folio, this little tool hides behind my pens and is always there in a pinch. Perfect for creating my bullet journal layouts and great for creative lines with the French curves and various angles. 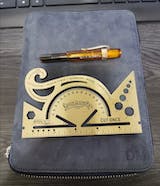 I am a huge brass lover & therefore prefer brass tools & stationery. This one & also the ruler are perfect & stylish, too!

I bought two of these—one for me and one for the hubby. I don’t use mine as much as he uses his (I’ve been neglectful of my A6 Hobonichi this year, which is where I need a straight-edge), but just husband uses his daily. He has been focusing on finishing his degree since he was laid off at the beginning of the Covid crisis, and he’s getting his bachelor’s degree in computer engineering with a math minor, and he’s an automation and robotics engineer by profession previously. He is ALWAYS using it. We have several superior quality metal and plastic rulers in this house (I used to go to school for architecture) that he could be using, but he’s not. So. That says something. It’s conveniently sized and has so much use and function. Really lovely.

Most of the items are handmade to order and usually take a minimum of 1 week to dispatch. Out of stock items mean, not in the production cycle and generally re-stocking in 2-3 weeks. You can subscribe to the in-stock notification on the product page. Good things take time. We appreciate your patience!