– Sold Out
Comes with a leather single pen sleeve

From the depths of imagination surface a new breed of writing instrument tapping into the stream of consciousness with artistic beauty and elegance. Yes, the Narwhal fountain pen is a real pen! The swirling, pearlescent acrylic has a mystical aquatic quality. The Narwhal drinks deep of fountain pen ink with an internal piston-filling mechanism. The stainless steel fine writing nib has a consistent flow to keep up with an ocean of thoughts.

A great review by FigBot of these Pens on Youtube:

We would like to thank GoldSpot Pens for introducing us to this wonderful brand. Image Credits: GoldSpot

I think this has to be one of my fav fountain pens ! and definitely my go-to pen !
Super easy to write and very smooth.
Does not feel heavy when writing even with the cap on .
Especially with this very reasonable price I can say I am a very happy customer and I just ordered another one !

It has very nice view due to colors. Piston is soft and ink capacity is good. Nib is writing softly even it has steel nib. Mine is medium. But there isn’t not Crazy Horse brown pen sleeve in my parcel. I do not know why. 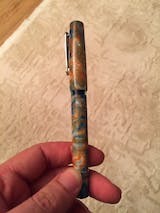 I bought my fiancé a Narwhal pen for her last birthday and she's used it as her daily writer ever since. So I decided to treat myself to one, too.

On the plus side, the pen feels solid and has some lovely colouring in the material. The nib writes nicely (when the ink flow hasn't dried up) and it's a comfortable pen to write with, even for longer periods. However, the ink issue makes the pen almost unusable for me.

I love this pen. It is visually striking and writes beautifully. Lots of fun all around.

This was a wonderful surprise and I am delighted with it. It writes very well.